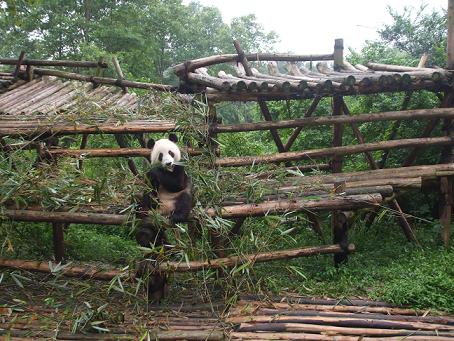 The Panda Breeding Center is probably the most popular tourist destination in Chengdu. There are 60 pandas living in Chengdu Research Base at this moment. Panda Base is 106 hectares big and will be enlarged to 200 hectares. Purpose of the center was to create an environment for rearing and breeding of pandas. Besides giant panda’s there are also red panda’s in the park. The giant pandas are China’s national symbol.

Panda Base is located about 10km from downtown Chengdu in the suburbs. Openings time is 7.30/8.00 till 18.00. Best is to arrive early. We came just before 8.00. Some other individuals and a small Japanese tour group also arrived at that time. The panda’s will get their food between 8.00 and 8.45 and especially the cubs are then active and lively. We could make some nice pictures and video between 8.30 – 9.00 when the cubs were playing outside. After 10.00 more tour groups will come and most panda’s will get to sleep. A taxi from downtown Chengdu to the Pandabase is about 35 Yuan. Entrance fee was 58 Yuan.

Picture with a panda cub

It is possible to make pictures/video from yourself with a panda cub sitting on your knees. When we were at the Panda Base (August 2009), the photo sessions started around 9.30. The price is outrageous: it is 1000 Yuan (100 Euro / 140 USD) for about 1 minute – 3 minutes. (Update 2013: the price for pictures/video has increased and seems to be between 1300-2000 Yuan in 2013). Only the people who want to pay for the picture may enter the nursery facility where the pictures are taken. So if you want pictures from the panda cub and your friend don’t want, then your friend is not allowed to get in and has to wait outside. The staff of Panda Base will make then the pictures/video for you. Some adults stayed 2-3 minutes with the panda, my daughter (who went alone) less than 2 minutes and a young child of 10 (also alone) had a session of maybe 1 minute…. I estimate that more than 30 people made a picture of themselves with the panda in one hour time. The money is called a “donation” by the staff of Panda Base. Pictures with an adult panda are 500 Yuan (but not available at that moment). I believe pictures with one of the red pandas were 100 Yuan. 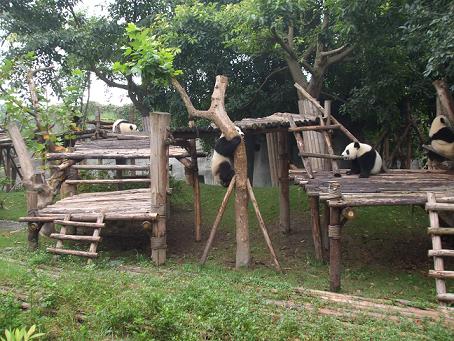