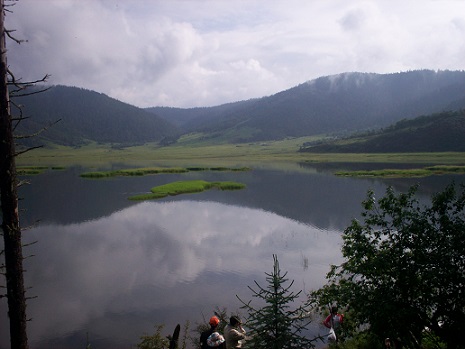 In old movies and books, Shangri La is a mystical paradise in Tibet, hidden from the outside world. In 2001, the Chinese authorities had choosen Zhongdian County, in the province Yunnan, as the official ‘Shangri La’. So we were curious to see what it really looked like.

In Lijiang we booked a 2-day trip to the Tiger Leaping Gorge and Shangri La. After our visit to the gorge, we went to Zhongdian where we stayed in the Shiner Hotel. The next day we drove about 20km into Shangri-la county. We stopped at Pu Dacuo National Park (that was the name on our tickets). I guess it is the same park as the Potatso National Park. It officially opened in 2007. This park is China’s first national park that met international rules for nature conservation. In the park are eco-shuttle buses. The altitude of the Militang grassland in the park is 3700m.

Shangri-la has a small airport with flights to Beijing, Chengdu, Chongqing, Guangzhou, Kunming, Lhasa and Shanghai. Many visitors come by longdistance bus from Dali, Kunming and Lijiang. There is not a railway station. There are many taxi’s. A taxi ride within the city centre is about 10 Yuan. 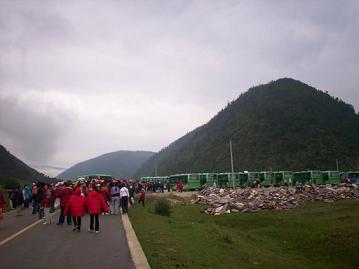 Our tour bus drove from the hotel to the parking lot with the park buses. Because we were group 41, we had to wait quite a while before we could enter one of the park buses. Temperature in the morning was cold but not freezing. In Zhongdian we had hired thick coats for 20 Yuan. In the afternoon, the temperature became warmer and all visitors took of their heavy coats.

The park bus took us to the first stop where everybody got out. From here the visitors walk to the next stop(s). The wooden path along the lake was the longest with 4.2 km. It is possible to make a boat ride on Bita Lake. The hike is then only 1.2km. Total length of the foot paths in the park seems to be only 10 km. So if you are not with a tour group, best time to visit the park is around noon. The temperature (in summer) is then warmer, there are no crowds waiting for the bus and there is time enough to see the scenic sites. 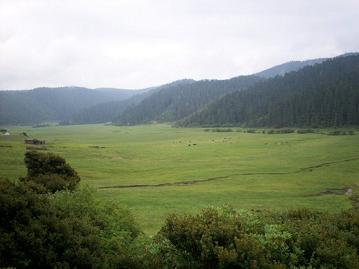 Militang means ‘eye-shaped grassland’. It got its name by Buddha’s long and narrow eyes. The militang grasslands in Potatso National Park (in Shangri-La county) covers an area of 240 hectares at an altitude of 3700m.

The Potatso National Park in Shangri-La county has 2 lakes: Shudu Lake and Bita Lake. These are the major scenic sites in the park. The lake on the pictures is Bita Lake. Altitude of the lake is 3534m. The lake is 3km long and up to 1,5km wide. 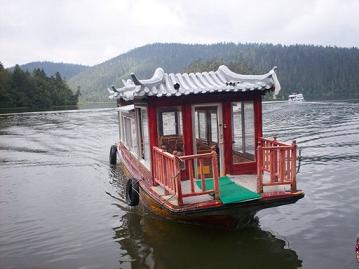 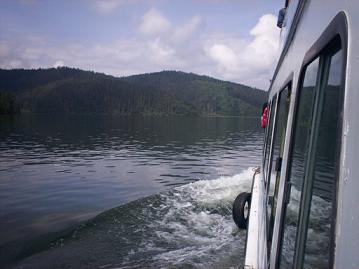 We enjoyed Potatso National Park but compared with Jiuzhaigou nature park in Sichuan, it was less interesting and beautiful. The total lenght of the hiking paths was too short. We visited only this national park and didn’t see the whole Shangri-La county but my wife heard that more Chinese tourists from Sichuan were afterwards disappointed. Obviously we missed many beautiful places. Travelers with enough time can visit other interesting places such as the Tibetan Buddhist Monastery Ganden Sumtseling, the Napha Nature Reserve and the Blue Moon Valley. The entrance fee of Pu Dacuo National Park was 190 Yuan p.p.