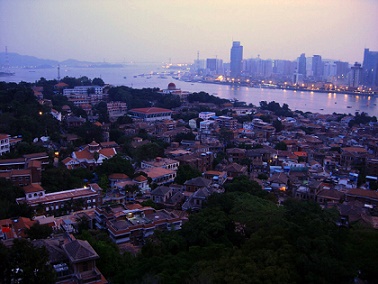 Xiamen is a city on the southeastern coast of China. It consists of Xiamen Island, Gulangyu Island and a region on the mainland. The city has a major seaport and is nearby Taiwan. It is considered as one of the most clean cities within China.

Gulangyu is the top attraction in Xiamen. It’s a beautiful island of 2 km2 with secluded valleys, rocks, sheer cliffs, reefs and sandy beaches. Gulangyu has about 20.000 residents and is on China’s list of National Scenic Spots. The island is a pedestrian zone and has a paved 4 kilometer ring road.A ferry takes visitors from Xiamen Island to Gulangyu Island in just 5 minutes. The Sunlight Rock is the highest point on Gulangyu Island (93 meter). Admission to the island is 90 Yuan including fees of roundtrip boat, Sunlight Rock and Shuzhuang Park.

Xiamen International Airport is located on the North-East of Xiamen island 14 km from the city center. It’s one of the largest airports in China with flights to Taiwan, Japan, South Korea, America, Europe and 58 cities on mainland China. Shuttle buses are just outside the airport. Fare of this bus to the railway station in the city center is 6 Yuan. The public bus cost only 1 Yuan. Bus number 27 connects Xiamen airport with the railway station and ferry terminal. A taxi to the city center is about 30 Yuan. Official website of the airport is www.xiagc.com.cn (in English) 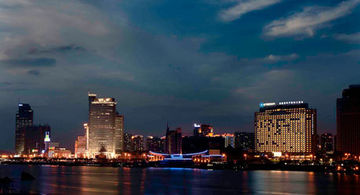