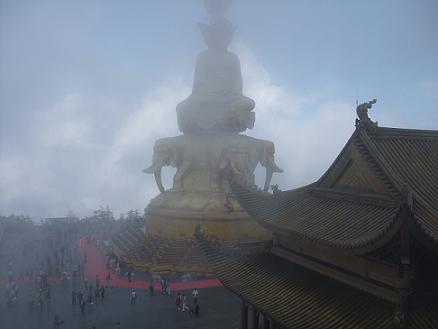 Emeishan summit with hanging clouds around the Golden Buddha.

Emeishan is one of the Four Sacred Buddhist Mountains in China. The altitude is 3100m and the mountain is listed as UNESCO World Heritage Site.

Attractions
Emeishan has an hiking path of 50km taking at least 2 days to walk. Along the route are many Buddhism monasteries and temples. Most visitors don’t walk all the way but just a part of it. The summit can also be reached by cable car. At the summit is a giant golden Buddha statue, temples and sightseeing terraces. Below the summit are a few area’s where little monkeys live. 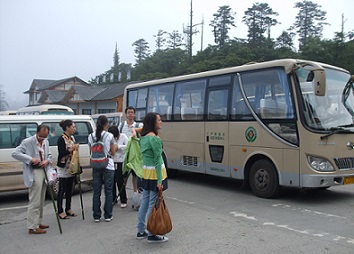 In 2009, we joined a Chinese tour from Chengdu to Leshan and Emeishan. Price was 480 Yuan p.p for 2 days including admission fees and insurance. The bus picked us up in front of the hotel. Through the agency, we had seats reserved in the middle of the bus. If seat reservation is not possible, be in time at the departure point to get a good seat. One time (our first trip) we were the last passengers who boarded the bus and had for three days the worst seats in the back of the bus. 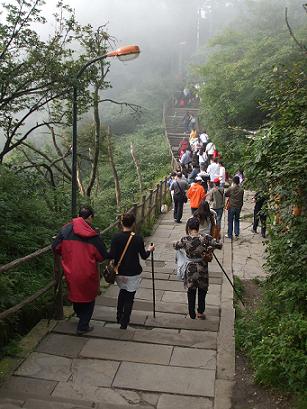 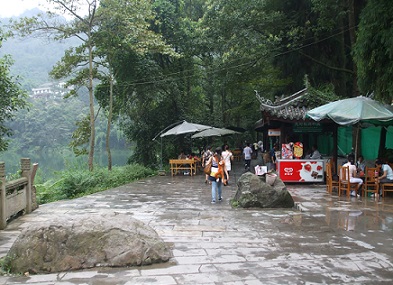 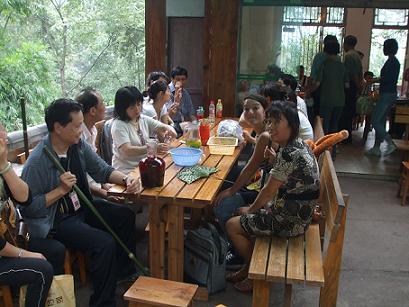 Location, transportation & hotel
Emeishan Mountain is situated in the province Sichuan near capital city Chengdu. Many buses go daily from Chengdu to Emeishan. Bus tickets and tours are sold in hotels and tour agencies in Chengdu. Emeishan City has also a railway station. From Chengdu Railway Station to Emei City is 3 hours by local train. Admission to Emeishan mountain is 150 Yuan per person. Cabel car return ticket (4 rides) was 120 Yuan. On the mountain are many hotels. A two-star hotel cost 140-200 Yuan per room. A luxury hotel is between 350-700 Yuan. Another famous attraction – the Giant Buddha in Leshan – is near Emeishan. Tours to Emeishan and Leshan are often combined.

The most difficult part was the climbing of the steps at Emeishan to the summit. Temperature at the summit in August was not cold. A jacket was not necessary; a warm sweater was sufficient. Advantages of a tour group is that all transportation, hotel and (chinese) guide is arranged. Also the meals you eat together. The walking was not together: some people in our group walked at lower heights. Most of the group members however took the cable car and started walking the last part to the summit. The guide told allways what time everybody had to return to the cablecar or bus. All group members had a mobile phone and could stay in contact with the tour guide if there was a problem. Overall this tour was very nice and a recommended trip. 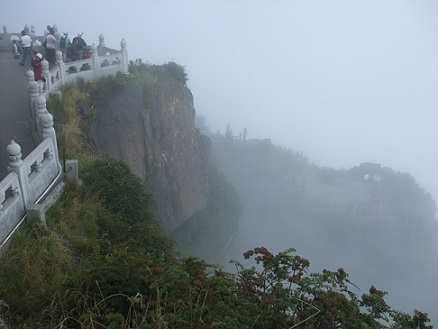 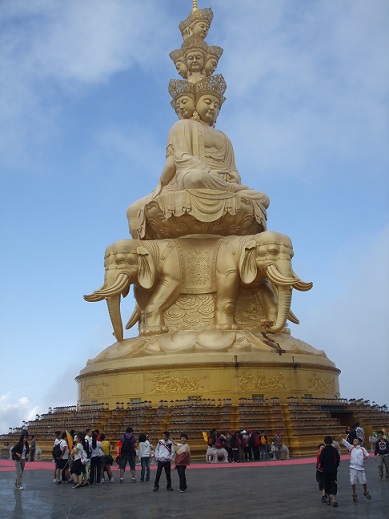