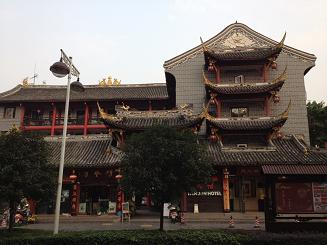 The WenJun Mansion is an ancient style courtyard hotel in Chengdu. It has 4 stories and is located in Qintai Road, a wellknown street with buildings in the ancient Ming and Qing Dynasty style. Right behind the hotel is Cultural Park (Wenhua Park). Closeby is the Qingyang Taoist Temple. To Tianfu Square with the Mao statue is allmost 2.5 km.

Rooms
In July 2007 we stayed 3 nights in the hotel. Our rooms were clean and large with a view on the courtyard. The furniture of the Chinese rooms was in ancient style. The matrasses were hard. This is standard in China. Free broadband internet was included in the room rate. Breakfast was 25-30 Yuan p.p.(in 2013). The reception rent safes which are big enough for a laptop. In the reception area was also a computer available (at cost) and cold drinks. The hotel has a travel service with tours in Leshan, Emeishan and Tibet. 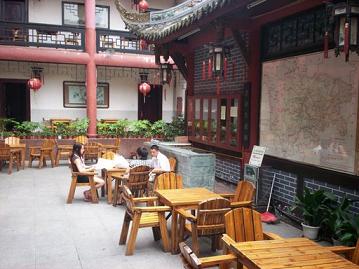 Minibus
The hotel offered a minibus service from the airport for 70 Yuan. We used this service because we were with 4 people and luggage. A taxi was only 50 Yuan. Our minibus was also old and small.

Traffic
My wife and i enjoyed our stay in the WenJun Mansion Hotel. Our children (14 and 17 year) were less enthusiastic. The reason was there is traffic in Qintai Road day and night. Because the rooms were not isolated, you could hear the traffic at night. Their room was also on the corner of Qintai Road where the traffic noise comes from. Thats why we moved after a few days to another hotel in the center of Chengdu. In 2010 however, the hotel has been renovated. I guess the quality of the rooms has improved (the average customer review for the Wenjun Mansion is 7.9).