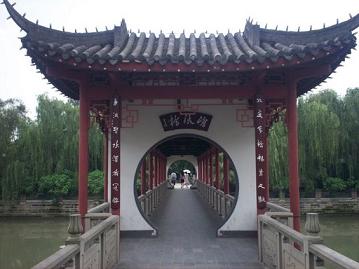 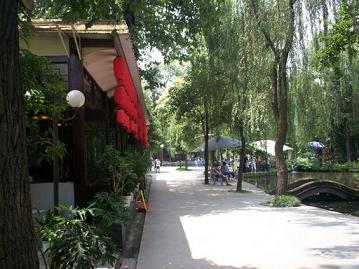 Baihuatan Park has an area of 87.000m2 and is located in a corner of the the Jianjiang River. The park contains gardens, pools, waterfalls, bonsai garden and a teahouse. The biggest garden is the Huiyuan Garden (17.667m2). On the Ginko Square is a tree with a tree age of over 1000 years. If you go to the West Gate of Baihuatan Park in Qingyang Central Street then you are at the crosspoint of several attractions. The West Gate of Baihuatan Park is a nice bridge over the river (picture above). Opposite the bridge is Qintai Road and Cultural Park. Next to Cultural Park is the Qingyang Temple which is an important Taoist temple. 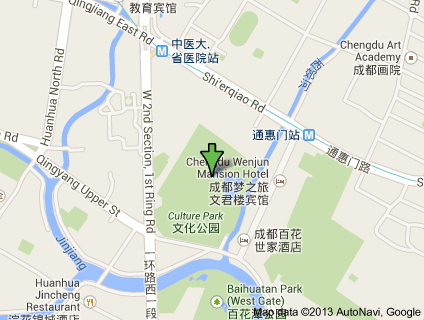 About 100m from the entrance over the bridge is Qintai Road or Qintai Street. This street is a famous attraction in Chengdu because many houses are build in the old Ming/Qing style. Somewhere in the middle of Qintai Street is an entrance gate to Wenhua Park (Culture Park). Another gate to Culture Park is opposite the bridge to Baihuatan Park. Culture Park has cultural elements (such as memory statues). People do together gym exercises on the central square. There are also some fairground attractions for children in Culture Park.

Next to Culture Park (there is a wall between both parks) is the park with the Qingyang Temple. This temple is one of the most important Taoism temples in Sichuan. The entrance fee of the Qingyang Temple complex is 10 Yuan. Entrance is in the 2nd section, First Ring Road (the park is not listed on the map below but the entrance is in this street).