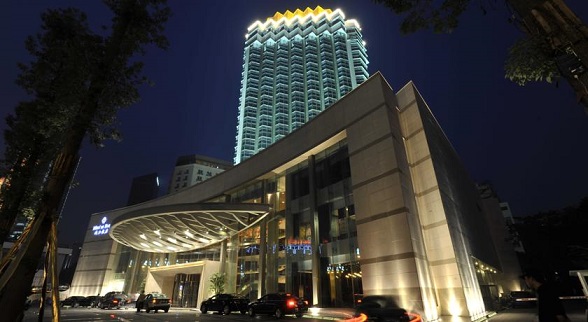 In the past this hotel was one of the top-hotels in Chengdu together with the 5-star Jinjiang Hotel. Maybe it still is a top-hotel because we saw some expensive cars outside on the parking lot but for us it was quite disappointing after 3 nights in the Tibet Hotel. (We stayed in this property in 2004).

The outside of the Minshan Hotel was no longer sparkling white but many tiles of the hotel had become grey. Inside, the hall made an empty impression. Most disappointing were our rooms. The interior was old, certainly the bathroom. And we had not even the cheapest standard room but the superior room. This was not the 4-star hotel we had in mind when we booked. After 3 nights we went back to the Tibet Hotel and without costs we could cancel the remaining 5 nights and re-booked the Tibet Hotel again.

Swimming pool
What we liked in the Minshan Hotel was the swimming pool outside in the garden. In Chengdu there are just a few hotels with an outdoor swimming pool. The hotel has also a good location and is not far away from Tianfu Square which is hub of public transit.(McDonald, Pizza Hut, MGM Disco)

Rates
A Standard Room in the Minshan Hotel is availble from 538 Yuan (august 2016, non-refundable rate, excluding breakfast). A business room is 934 Yuan. The most expensive room is a Deluxe Suite. 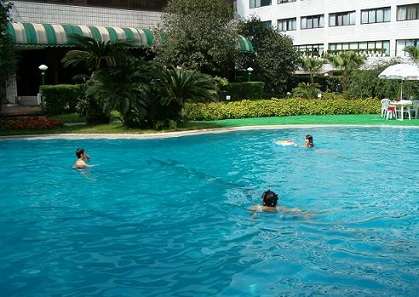